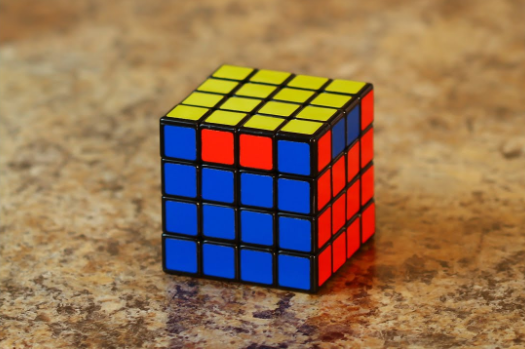 A Simple Approach To Solve The 4×4 Rubik’s Cube

The 4×4 Rubik’s Cube or the Rubik’s Revenge is a level higher than that of the classic 3×3 Rubik’s Cube. Though it might seem quite more complex than the classic 3×3 Cube, solving the 4×4 Cube is quite similar with only a few additional algorithms and notations to learn.

One of the easiest methods of solving the 4×4 Rubik’s Revenge is the reduction method. This method involves reducing the cube such that it can be solved like a 3×3 Rubik’s Cube. It requires only two steps – solving the centrepieces and pairing up the edge pieces. However, before we divulge into the steps, it is important to understand some of the notations based on which you can perform the needed algorithms.

Here is an example to help you understand the notations better.

The first step to solve 4×4 is to solve the centrepieces. Unlike a 3×3 Rubik’s Cube, the Rubik’s Revenge does not have any fixed centrepieces. There are four centrepieces of each colour, and you should aim at solving the centres in their correct relative position.

To get started, you need to solve two centres onto opposite faces from one another. This should be an intuitive step, and therefore, you need to figure it out on your own. Use this step to get comfortable with the movement of the pieces and layers of the cube. However, it is important to solve them in their correct position. This means that the white centre should be opposite yellow, blue opposite green, and red opposite orange.

The image shows the correct placement of the yellow centre relative to the red and blue centrepieces. This is what your 4×4 cube should look like once you solve the centrepieces intuitively.

The next step in the reduction method is to pair up the matching edge pieces. There will be two edge pieces for every combination of two colours on the cube – except the opposites.

You should aim at pairing them all up, as shown in the image above.

To do this, you need to turn the outer faces of the cube so that you can place two individual edge pieces on the front left and front right faces ensuring that they are in different layers. Once done you need to then move these solved edges to the top layer.

When you move it to the top layer, you need to be careful that the centrepieces are left unharmed. You can consider using two algorithms here that can move an edge from the front right slot to the top layer.

You need to keep performing these algorithms until all the edges have been paired up correctly. If you come across a case wherein you have two edges left to solve, then hold your cube as displayed in the image below and perform the algorithm given.

When you reach the last layer of the 4×4, there are two possible parity cases. A parity is a situation that can occur during the 3×3 stage, which is not ideally possible on a 3×3 cube.

The first parity is called the OLL (Orientation of Last Layer), and it occurs when there is an odd number of oriented edge pieces on a cube. You can use this algorithm to fix the OLL parity.

The second parity is the PLL (Permutation of Last Layer) parity which occurs when there is an odd number of edge or corner swaps. To fix this parity, you need to use the Algorithm stated below to swap the front and back edge pairs.

That’s all! You have now solved the 4×4 Rubik’s Revenge! All you need to do is keep practicing until all the algorithms are intuitive and you can solve it without any guide! Happy Cubing!